I have decided to revise this post, first published April 8, 2012, based on new information. If you’ve read the previous version, I beg you to read this new one, as it is radically changed.

It’s that time of year: springtime for New England, and in mid April each year, Massachusetts and Maine celebrate the regional state holiday known as Patriots’ Day. This day, generally celebrated on the Monday nearest April 19, commemorates the first shots of the American Revolution, which took place on April 19, 1775, just west of Boston in the sleepy towns of Lexington and then Concord, followed by a running battle from Concord all the way back to Boston (via Charlestown). This year, Patriots’ Day was celebrated on Monday April 16. (The Boston Marathon also takes place on the same Patriots’ Day Monday each year.)

(Read my previous article on this subject: “Start of the Revolution: Who Shot First? — The Americans!”) 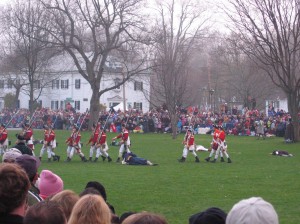 Lexington Green re-enactment in 2009. The shot is blurry because I had to raise the camera over my head and shoot blindly. (Much like the militia and British did in the fight! :) (click to enlarge)

Back in April 2009, while I was in the Boston area researching my book 1775, I attended several of the Patriots’ Day re-enactments. (I have a private joke with some that these could be called impersonations, given some of the impersonators, er, re-enactors, play the parts of famous participants of the original affair.)

During that visit, the re-enactment that stood out most to me was that on Lexington Green, the triangular common area in the center of old Lexington center, the location of the first shots of the American Revolution. But while I enjoyed the show from what I could see of it, my vantage point was not particularly good.

For that 2009 re-enactment, I arrived about an hour before dawn, expecting a decent viewing spot, a fresh large cup of Dunkin’ Donuts coffee in hand. I knew, from scouting out the area the day before, that the viewing spots would be cordoned off from the re-enactment area, a necessary precaution for safety. What I didn’t realize was that a viewing stand, centered on the Green, in the best viewing spot, would block the view for many, and would be accessible only to those with special access. What was worse, the remaining cordoned area near the viewing stand was in fact divided into two sections: the front section for what I believed at the time to be VIP spectators, and the rearward section for others. 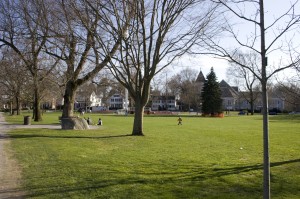 Lexington Green hours after the 2009 re-enactment, taken from the opposite side of the viewing area. In the distance, you can see the viewing stand still in position. The cordons have been removed. (click to enlarge)

So while I arrived early enough for the event, I was relegated to a back section near the viewing stand. I slowly watched my view diminish as late-comers bearing tickets were slowly ushered in to the cordoned section in front of me, until my view of the Green was sufficiently blocked. So much for getting there an hour early. (I might have moved to the opposite side of the Green at this point, where there seemed to be just one viewing section, but at this point, it was too late, as it was very filled in as well, and regardless, it had a lesser vantage point.*)

When the event finally got underway at dawn, I found myself standing beside a father and his son of perhaps five or six years old. We both stood at the front of our rearward cordoned section, but of course with the ticketed section between us and the action. The young boy cried out to his dad several times, “Papa, I can’t see anything!” What a tragedy, for the value of this re-enactment to be hidden from our interested youth! The father seemed to debate what to do, mindful that, were he to put the boy on his shoulders, he might block others back farther still. Finally, the father rightly bucked the system, and encouraged the boy to squeeze his way through the ticketed section to get a view of the re-enactment. I privately applauded his father’s decision. (I also jokingly thought about handing the boy my camera… my pictures were pretty limited as a result of my position, as you can see above.) 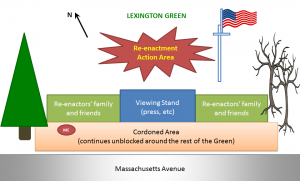 My viewing situation during the Lexington Green re-enactment in 2009. Had I known better, I should have shifted to anywhere else on the Green, to not be stuck behind the this one, tiered viewing area. (click to enlarge)

In my original, uninformed version of this blog post, now updated here, given my experience in 2009, I decried the organization of the event as a failure to understand the lessons of the American Revolution, contrasting the creation of an apparent tiered, class-based viewing section as contrary to the ideals of equality that were fought for in the Revolution.** I also thought it ironic that such an apparent class system could be instituted beneath the Green’s flag pole which proudly displays “Birth Place of American Liberty”.

However, I have since revised this position.

Thanks to the thoughtful and patient Mr. Jim Roberts, a member of the Lexington Minutemen Company of re-enactors, and former organizer of the event, I have come to realize that my understanding of the viewing situation was not entirely accurate.

You see, while it is indeed true that there was a viewing stand, and a ticketed section immediately around it, those tickets were not for VIP’s or upper class citizens, but are reserved for the re-enactors themselves to give to family and supports of their effort. The re-enactors are not only the participants, but the organizers of the Lexington Green re-enactment, and the event is an all-volunteer, non-profit affair run each year by them, not the town. And, while it was not entirely evident to me when I was there in 2009 (I blame the early pre-dawn hours, though signage would have helped too), I could have shifted my position to almost anywhere else along the perimeter of Lexington Green, where I would have been in an open, first-come first serve, non-tiered cordoned area. As the event is entirely free and supported by the community, the small tiered, ticketed section (behind which I stood) is the only means of compensation for the generosity of private individuals that help make the event happen each year. And without that kind of support, the Lexington Green re-enactment might not happen at all.

And clearly, the Lexington Green re-enactment is an important, educational event, and one that should continue annually, and remain forever free.

In fact, contrary to my limited previous understanding, the Lexington Minutemen Company, as organizers of the event, has had to fight to keep the event free and devoid of distractions and profiteering. One year, they were approached with an offer to make a special, ticketed area only available to paying spectators. They judiciously refused. In another case, a major news media outlet wanted aerial coverage of the event via helicopter, but ultimately ruined the event with their chopper’s noise, and the Lexington Minutemen have since refused further requests for helicopter coverage.

The point is, with the number of spectators each year numbering in the thousands, and with very limited space for the event, the spectator situation will likely always be imperfect. Yet the Lexington Minutemen Company, who serve not just as re-enactors, but also as the event’s organizers, are steadfastly dedicated to doing all they can to put on a great event each year. Moreover, they are mindful of distractions to the spectators, doing their best to limit spectator nuisances whenever they can (such as the occasional step-ladders brought by spectators and setup to block the view of others).

The other point, the one I share to those who might read this and attend a future re-enactment event, is that you should stand somewhere well away from the viewing stand, preferably on the north side of the Green. In this way, you would avoid standing being the limited ticketed section and get a great view. I think the best spot would be immediately across from the viewing stand. And of course, it should go without saying: get there well before the dawn affair starts, an hour at least.

And if you see small children there at the event who cannot see the important educational re-enactment, encourage them to squeeze their way to the front. It is important that people continue to learn the values and lessons of the Revolution.

Finally, my original version of this post was seen by some to disparage their great public service as re-enactors of this important and pivotal moment in our nation’s history. This was never my intent. As a member of the US Air Force Reserve, and passionate storyteller of Revolutionary history, I wholeheartedly applaud the dedication of the Lexington Minutemen Company for their continued patriotic service to this annual recreation of the start of the Revolution.

What are your comments on my new revision of this post? (assuming you recall the previous version, no longer posted)

Next: more on the significance of the Lexington Green flag pole, flown 24 hours a day by an act of the US Congress…

* Turns out, I was right: the areas surrounding the rest of the Green were not tiered sections at all. Read on.
** The Revolution was fought for provincial rights and equality (not taxes, but lawful taxation was a right of every Briton, and taxation without representation was an example of provincial rights being trampled). The greatest outcome of the Revolution, besides of course Independence, was the break down of the class structure. No longer was American bound to a King or a noble class of course, but moreover, no longer was it impossible for lower class citizens to rise to upper class status. The very waging of and success of the Revolution was this pivotal struggle on a macro, visceral scale: Americans were indeed considered almost as indentured servants (slaves) to Britain, with little rights or representation except as bestowed upon them by a benevolent master (the Ministry, Parliament, and the King). The fact that Americans, as such low class citizens amongst the British Empire, could rise up and cast off the chains of its disapproving masters was as much a break down of the despotic British class system as it was about Independence. The equalities that we now enjoy and take for granted in America have their roots in the upheaval of the Revolution. (There are many good books that expound on this subject more thoroughly than I can possibly do so in a mere blog post. Among them is The Ideological Origins of the American Revolution by Bernard Bailyn, a Pulitzer Prize winner. )

Tagged april 19, in the news, ramblings, tidbits of history. Bookmark the permalink.

22 Responses to Lexington, MA—First Shots of the Revolution, Repeated Annually