This post concludes a 4‑part series (read part 3) delving into the particulars of the death of Dr. Joseph Warren, which includes posts by guest contributor Dr. Sam Forman, author of the biography Dr. Joseph Warren: The Boston Tea Party, Bunker Hill, and the Birth of American Liberty (pictured to the right), which is due out December 1. –Derek

As we have discovered, thanks to the thorough research of guest blogger Sam Forman, the entry hole in the front of Warren’s skull was of a bullet about 0.54 caliber, much smaller than the expected 0.75-caliber hole of a common Brown Bess smoothbore musket, as was standard issue to the British soldiers in 1775. So then, who killed Joseph Warren?

I had my suspicions, but decided to get an expert involved. You may be familiar with him if you have ever watched Pawn Stars on The History Channel. His name is Sean Rich, owner of Tortuga Trading Inc., an expert in small arms and armour, and frequent guest expert on Pawn Stars and for other Hollywood creations such as the Pirates of the Caribbean franchise. 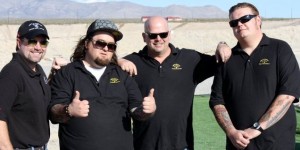 From a conversation I had with Sean on June 2, 2011, here are some facts that he shared with me.

First, I asked Sean if the bullet could have been smaller than the standard 0.75 inches, but still fired by a Brown Bess. Sean informed me that the balls had to be standard, otherwise the supplying of the soldiers would have been logistical chaos. Sean also politely informed me that the Brown Bess bullet was actually more like 0.71 inches in diameter, as there had to be an allowance for windage (a gap between the barrel diameter and the ball, to account for imperfections in these handmade items). I really did not think the fatal shot, given the size, was fired by a Brown Bess, but thought it best to ask the expert.

I then asked Sean about fusils, those smaller smoothbore rifles that some, especially junior British officers, carried with them into battle. Maj. Gen. Henry Clinton deplored the use of the fusil, writing:

I reprobated the use of the fusee [fusil] for officers, argued that an officer has enough to do to keep his platoon together… [he] became instead of their chief the worst soldier in his platoon that he would have no dependence on his men & they no confidence in him, but this had been too long an American custom.1

According to Sean, most fusils were about 0.64 caliber and had shorter barrels than the Brown Bess. Okay, most fusils fired shots that were too big. I asked the important questions, but now I moved to the type of weapon that I had all along suspected was the one used to kill Dr. Warren…

I asked Sean, what about a pistol?

Sean informed me that pistols of that era varied widely, but were typically from 0.50 to 0.68 caliber. This equates perfectly with the evidence of the bullet entry hole in the front of Warren’s skull.

And who typically had pistols? Generally only British officers. Certainly not the common soldier.

Sean added that pistols were single shot, so whoever fired it would have wanted to not waste his shot unless he was sure to make it count. I asked, what was the range of a typical pistol then? Sean said the lethal accurate range was “maybe as little as 20 feet, or less… though it could have been a lucky shot from 50 feet away”. Sean then stressed, whomever fired the shot, unless it was fired from very close indeed, it was just a lucky shot, as smoothbore guns (be they pistols or muskets) were very inaccurate.

Yet, given the limited range and thus low muzzle velocity of these weapons, and given there is a large exit wound out the back of the skull, everything points to the shot being fired from very close indeed.

I also asked Sean, if pistols varied so much, how did officers get the appropriate balls? Did their servants make them ahead of time, on demand? Sean said officers typically got boxed sets (of two pistols) including all the accouterments to manufacture the balls. So yes, the servant probably did the labor, as all you needed was some molten lead, which was widely available. 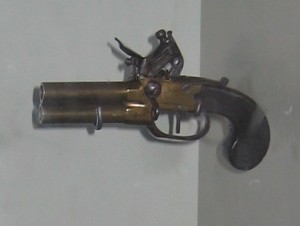 0.44-caliber British Nicholson over-and-under flintlock pistol, c. 1770, on display at the Smithsonian American History Museum in Washington DC. This is representative of a pistol of that era, though its caliber is too small to have been like the one that killed Dr. Joseph Warren.

So there we have it, case closed. Or is it?

Sean gave me a few other thoughts. One alternative could have been a Loyalist, fighting with the redcoats, who brought his own gun to the field. Also, while there is little support for this, perhaps some colonial Loyalist had at that early battle a Kentucky rifle, which typically fired a 0.45 to 0.50-caliber ball, had great accuracy and range, and could have been fired accurately from even 100 yards away, by some sniper picking off Yankees at his leisure. And then there is another alternative: the shot could have been friendly fire. (If true, that might explain why no one could quite recall how or where Joseph Warren died! No one wanted to admit the truth!) Most muskets carried by the colonials (including any Loyalists on the field) were relics of the French and Indian War of more than a decade earlier, and many were not well maintained, and most were handed down from father to son. The size and variety of these guns varied quite a bit. While I and Sean both doubt these alternatives are true, we must admit one thing: we cannot know for certain. (Sam Forman keenly points out another reason to doubt a friendly fire incident: the Americans were retreating from their redoubt on Breed’s Hill because they had run out of ammunition. So few shots were coming from the Americans at this point in the battle.)

So then, who shot Dr. Joseph Warren?

The most likely conclusion is that the fatal shot was fired from a pistol. Pistols were primarily carried by British officers and came in a variety of sizes. But one old yet reliable secondary source, citing an unknown British account, claims Warren’s shooter was “an officer’s servant”, who was afterwards “instantly cut to pieces” by the Americans.3 This is the only one of very many eyewitness accounts of Warren’s demise that involves a British officer’s weapon, so only it is likely to be the true one. The idea of an officer’s servant having fired the fatal shot is very plausible, as there were many servants on the battlefield, for which we have a few accounts, though we know little about their role. As it seems unlikely any civilian servant would have been so armed, since any combatant not in uniform would have been treated as a spy if captured, it must have been a soldier servant (a batman) or an aide. Whoever the shooter, they did not use a standard Brown Bess musket but rather a pistol. And they were likely wearing a red coat. Nor did they not live to tell of their cowardly exploit.

The following video gives a nice video summary of this blog series.

Next Month: The Courts-martial of the Massachusetts Artillery officers following the Battle of Bunker Hill.