The War Before Independence 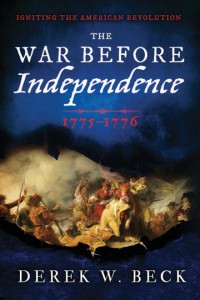 “Though Beck only covers a short period, his excellent research brings to life the men who fought, providing readers with real, tangible heroes, not just hazy historic figures. Revolutionary War fans will rejoice in this well-written work and hope that the author has more on the way.” ―Kirkus Reviews (STARRED REVIEW) (full review)

“The once non-descript characters in the history books awake as real people, even the British… Beck creates, builds and brings the emotional turmoil to a boiling point…” ―Zebra Press (4.5÷5 Zebra Stripes) (full review)

“Beck writes exceptionally vividly, and as such, even readers slow to respond to battleground to-and-fro will be fully engaged.” ―Booklist Reviews (full review; requires subscription)

“Wonderfully detailed and stunningly layered, The War Before Independence brings America’s early upheaval to a ferocious boil on both sides of the battlefield, and vividly captures the spirit of a fight that continues to inspire brave hearts today.” ―Conservative Book Club Reviews (full review)

“While there are many books dealing with the events covered in Beck’s latest work… those seeking a detailed military history of the early period of the Revolution will enjoy [The War Before Independence]” ―Alec D. Rogers, review for Journal of the American Revolution (full review)