Latest Articles at Journal of the American Revolution

Hi all, sorry it’s been a while. Many things going on in my life have kept me away from this, I’m afraid. But expect more updates regularly beginning very soon, including a website revamp.

In the meantime, in case you missed ’em, here are my latest journal entries at Journal of the American Revolution, in celebration of the anniversary of the start of the Revolution back on April 19:

Dissecting the Timeline of Paul Revere’s Ride — As a scientist turned historian, my research approach led me to consider things like moonlight phases, sunsets, horse gaits and their associated speeds, and speeds of a typical march of a column of men (of which I have some familiarity, being in the US Military). One of the manifestations of this approach is my trying to map the chronology, as nearly accurate as possible, to key events, such as the Battle of the Nineteenth of April and the Battle of Bunker Hill. This article reveals some very interesting insights from that approach. 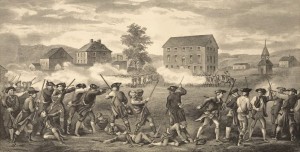 Who Shot First? The Americans! — The details of the skirmish that began the Revolution have always been unclear. Who fired the first shot? No conclusive evidence exists, and each side blames the other. But there is both circumstantial and direct evidence, and it leads us to believe the Americans shot first! See my argument in this article, which is currently the second most commented article at Journal of the American Revolution. (This is a revised version of my original blog post here.)
Derek
Derek’s Book
Follow @derekwbeck