As noted in the previous post, the first of my “Myths of the Revolution” series, American Artillery Col. Henry Knox predicted in a letter to his wife, “We shall cut no small figure in going through the Country with our Cannon, Mortars, etc., drawn by eighty yoke of oxen”. This was how Knox imagined his “Noble train of Artillery” as he described it to Gen. George Washington, an expedition he was leading that would bring much-needed artillery from Ft. Ticonderoga in upstate New York to the siege lines outside Boston. Knox’s words are now etched into American memory, and memorialized by the images you see here. And yet they are entirely false! 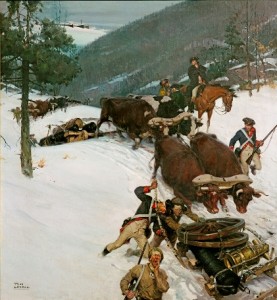 “The Noble Train of Artillery” by Tom Lovell — Reproduced with kind permission of the Dixon Ticonderoga Company. All Rights Reserved.

Days after writing those Dec 17, 1775, letters to his wife and to Gen. Washington, Knox began the earnest negotiations with local Stillwater (Albany-area) native George Palmer for the expected oxen (and sleighs too). Here’s how it went down, per Knox’s own diary:1

[Dec] 27. Sent off for Mr. [George] Palmer to Come immediately down to Albany.
[Dec] 28th. Mr Palmer Came Down. & after a considerable degree of conversation
between him & General [Philip] Schuyler about the price[,] the Genl offering
18s. 9d. & Palmer asking 24s. p’[per] day for 2 Yoke of Oxen. The treaty
broke off abruptly & Mr Palmer was dismiss’d. By reports from all parts
the snow is too deep for the Cannon to set out, even if the Sleds were ready.
[Which they were not, as they had no oxen.]
[Dec] 29th. General Schuyler agree’d with [me]. Sent out his Waggon Master &
other people to all parts of the Country to immediately send up their slays [sleighs]
with horses suitable, we allowing them 12s. p’[per] day for each pair of horses
or £7 p’[per] Ton for 62 miles.
The [Dec] 31st, the Waggon master return’d the Names of persons in different parts of the Country who had gone up to the lake [George] with their horses in the whole amounting to near 124 pairs with Slays [sleighs], which I’m afraid are not strong enough for the heavy Cannon, if I can Judge from the same shown me by Genl Schuyler.

Thus we find that, after a negotiation for oxen failed based on price, Col. Knox relented to using horses instead, of which he acquired at least 124 pairs. In fact, there is evidence that Knox originally intended to use horses, until the oxen deal became an option, and so he merely fell back on his original plan.2 Knox also secured sleighs from the countryside, though George Palmer attempted to squirm his way into a payout due to what he apparently thought was a breach of contract for the sleighs he was to provide.3

And so, contrary to tradition, it seems Knox had few oxen on his journey. The famous paintings given here are both quite wrong. Knox had (almost) no oxen! (And thus, the first myth of my “Myths of the Revolution” series is revealed.)

Once the horses and sleighs were secured, the Noble Train of Artillery left Ft. George and was conducted along a difficult and exceedingly slow route following the Hudson River, with the crews forced to cross the frozen Hudson four times before reaching Albany. There were troubles along the way, and one gun fell in the Hudson through weak ice but was salvaged, but in the end the guns reached Albany and then passed eastward into Massachusetts. (The were other adventures along the expedition, but that’s the subject of my American Revolution magazine article, though expanded even further in my forthcoming book 1775.)

From those other adventures not detailed here, it is clear that the two famous paintings are also wrong in one other element. Soon after departing Ft. George, the Noble Train of Artillery quickly devolved into a series of fragmented companies sometimes miles apart, conducting their respective sleighs with teams of two or sometimes up to eight horses. Thus, it was not one long caravan as depicted, nor was it uniform. (Another myth!)

By the way, Knox was ultimately impressed by the horses and their abilities, and he even saved money by using them over the oxen. But when the wagon teams came to particularly steep terrain or tough snow drifts, the horses sometimes proved insufficient, and Knox continued to seek out oxen. We know Knox hired at least “two teams of oxen” on Jan 11. But these may have been all Knox hired, and we know not how long he had them in his expedition.4 So, Knox did have some oxen at some point in the expedition, but it was nothing like depicted in the famous pictures here.

Finally, the artillery began to arrive in Framingham, some twenty miles outside Boston, on about January 25—almost fifty days since the start of the expedition, far exceeding Knox’s original hope for a “16 or 17 days” journey. With the exception of some of the lighter pieces, sent immediately to the lines and mounted in the American entrenchments, most of the pieces were probably then kept in Framingham until Washington called them up (ahead of his March 5, 1776, offensive against Boston).

Stay tuned for more myths in my new “Myths of the Revolution” series!

Please consider subscribing to my quarterly (or so) newsletter and be among the first to get updates as 1775 moves through the slow process of finding a publisher. You’ll also gain exclusive access to excerpts of the book.

This and the next post summarizes a longer article I wrote for the July/Aug issue of American Revolution magazine (which has sadly announced it will cease publication). You can still buy a copy of this issue with my article for $4 online or by calling 1−800−767−5828.