First, let me apologize that I’ve not written a blog post in several weeks. I’ve been deeply engrossed in tweaking 1775, which I just finished yesterday. The fact is, a writer’s work is never done, and I keep finding little bits of original source material that I then feel I need to incorporate into the manuscript. But I’m done (for now), and I’m going to try to write blog posts more regularly, at least twice per month.

Amid all of my rewrites, I recently gave a talk (via video chat) to a class of 5th graders in Woodbridge CT. I started by giving a recap of what happened in 1775. 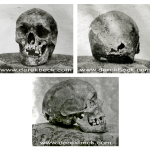 I then described who Dr. Joseph Warren was, that he was the guy that sent Paul Revere on his famous ride, and shared with them the “cool” photos of Warren’s skull with the bullet hole through the face and out the back. (The boys in the audience were especially interested in the talk at this point! Words like “cool” and “awesome” echoed through my laptop’s speakers as I continued the video chat.) I also showed them the famous picture of Henry Knox and his Noble Train of Train of Artillery, asking if they had seen it. Everyone was silent, until their teacher reminded them that it was one of the several pictures that appeared on the cover of their class history book (to which all of the kids then replied, “Oh, yeah!”). I continued by explaining that the famous Knox picture is wrong, that Knox had horses instead of oxen (for the most part–I’ll delve into this more in some future post, or you can read my article in American Revolution magazine). Another highlight of that talk: I described how the British were not stupid as so many history books describe them, that they did not merely march in lines while the “brilliant” Americans sat behind rocks and shot at them, but that the British too applied guerrilla warfare, including on that first day of battle on April 19 (also the subject of a future post). 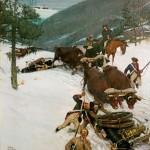 Well, the talk went well, and I didn’t get any hard questions. Okay, they were 5th graders, how hard could the questions be? But talking to children about our history, and making it exciting and interesting, that’s a worthy goal. If we can instill on them the importance of studying where we’ve come from, then maybe they’ll grow to have an interest in history later in life. And the more people who know about our history, the better, in my humble opinion.

Afterward, I received by mail a collection of thank you letters from the class, pictured here. These are my first written pieces of fan mail. (Though I’ve received many by email too… thank you by the way, if you’ve sent me one!)

One in particular that stood out, aside from the misspelling of my first name:

It is a folded piece of poster board, the interior of which contains the personal letter, but outside it has on one side a notional cover for 1775 the book (which appears on the right of this image), and on the back (the left of the image) it gives the notional back cover of the book, complete with the following story and endorsements:

The author Mr. Beck writes about what’ll happen in the year of 1775, Revolutionary War, Americans vs. Great Britain. Who will be the Winner? The great nonfiction story tells the history of the Revolutionary War.

“This is a book I would qualify as the world’s the best book ever~!” — Scholastic

(I found this amusing anyway.)

There you have it, proof that 1775 is (or will be) the best book ever! Now I just need to get a publisher to see that… Maybe I should send them all a copy of the packet of fan mail…

PS: Don’t forget, my latest article about Henry Knox and his Noble Train of Artillery is available in the Jul/Aug 2012 issue of American Revolution magazine, available here for $5 online or by calling 1−800−767−5828.