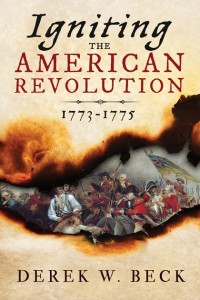 Buy at B&N
Buy at Amazon

“For those who like their history rich in vivid details, Derek Beck has served up a delicious brew in this book… This may soon become everyone’s favorite.” ―Thomas Fleming, author of Liberty! The American Revolution

“It is in the clear, engaging telling of a complex story that Igniting the American Revolution by Derek W. Beck stands out… It is precise while being straightforward to read, shows the passion of the participants without taking sides, and gives equal play to the political and military affairs.” —Don N. Hagist, author of British Soldiers, American War and editor of Journal of the American Revolution (full review)

“Recommended for history lovers, those who want a refresher on the American Revolution, and those who enjoy quality nonfiction.” ―Library Journal (STARRED REVIEW) (full review)

“Beck’s description of the ‘spreading flames of rebellion’ and the taking of the forts at Crown Point and Ticonderoga is as engaging as fiction. A knowledgeable, elegant account…” ―Kirkus Reviews (full review)

“…this is definitely a must-have. It shines a light on a less-remembered part of our collective history, and for that alone, Beck should be acclaimed.” ―Conservative Book Club Reviews (EDITOR’S PICK) (full review)

“…Derek Beck presents a unique combination of the political and military history of the earliest days of the American Revolutionary War. The result reads like an action novel but brings home in a very real way, the dangers faced by America’s patriots.” —David J. Shestokas, author of Constitutional Sound Bites (full review)