An Apple a Day Keeps Dr. Joseph Warren Away

If you’ve been reading my blog, then you’ll recognize the name of my fellow Revolutionary War historian Dr. Sam Forman, who has collaborated on this blog before. First, congratulations is due to Sam for the recent release of his new biography Dr. Joseph Warren: The Boston Tea Party, Bunker Hill, and the Birth of American Liberty (on sale now!). That’s quite an achievement, and I hope to follow in his footsteps shortly with my own 1775, which is presently being shopped around to publishers through my new literary agent. Hopefully 2012 will be good for both my project and Sam’s.

Back in mid-October, Sam generously sent me several Warren Russets apples, which are a variety of apple first cultivated by the father of the famous revolutionary Dr. Joseph Warren III. The irony in that saying, “Just what the doctor ordered”, was not lost on me, as Dr. Sam Forman is indeed a medical doctor, and the kind note he included with the apples looks almost like a prescription. 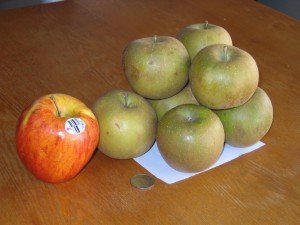 Warren Russets next to a Gala Apple

This particular variety of apple was both a blessing and a curse to Dr. Joseph Warren’s father, Joseph Warren II. In one sense, the apples helped to increase the farm sales and sustain the family income. But in these apples were also sealed the fate of farmer and father Joseph Warren II. Per the newspaper Boston News-Letter, Oct 30, 1755, p. 3:

As Mr. Joseph Warren [II] was gathering apples from a tree, standing upon a ladder at a considerable distance from the ground, he fell from thence, broke his neck, and expired in a few moments.

The green Warren Russet apples (pictured here next to a modern Gala apple), known by many other names, including Roxbury Russets, Boston Russets, Warren Pippins, etc, are still grown in New England today. Sam Forman, who has the good fortune to live in Boston, generously sent me several of these green apples of antiquity, though he noted that during the colonial era, most apples were used for cooking rather than eaten raw. 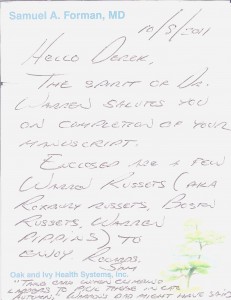 Nevertheless, I decided to bite into a raw one. I had never seen these apples, and did not know they still existed. (Proof that Sam’s new biography is well researched!) Here’s what I thought of them (yes, I took notes, like some apple connoisseur, which I am not):

The exterior was slightly rough, with a almost paper-like skin. Upon biting into it, the apple itself was semi-crisp, though one could press into it slightly with one’s thumb. It was not crisp enough to shear off in chucks as you bit into it, like many modern crisp apples do. It was not particularly fragrant. It had a hint of tartness, but had a classic “apple” taste, though with almost a hint of flavor of a Bartlett Pear. It was not particularly acidic and had mild sweetness. There was no aftertaste.

So, it seems, apple cultivation has come along way, with the modern varieties more suited to eating raw. Nevertheless, I enjoyed the experience, and the apples themselves were also enjoyable, though I especially appreciated the opportunity to nibble on something unique from Dr. Joseph Warren’s childhood. (More about these apples and Dr. Warren’s childhood in Sam’s bio.)

Perhaps, given the time of the year, it’s worth noting, in 1775, that those who had apple pie for the holiday season might have used Warren Russets.

And so I leave you with this: Happy Holidays! 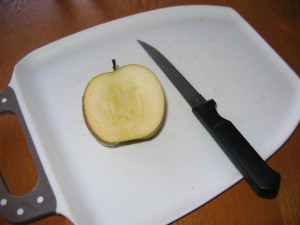 Warren Russet apple cut in half

One Response to An Apple a Day Keeps Dr. Joseph Warren Away