This post is part 2 (read part 1) of a 4‑part series delving into the particulars of the death of Dr. Joseph Warren, which includes posts by guest contributor Dr. Sam Forman, author of the forthcoming biography Dr. Joseph Warren: The Boston Tea Party, Bunker Hill, and the Birth of American Liberty (pictured to the right), due out December 1. –Derek

I am happy to be a guest blogger, addressing the facts and legends of the foundational early Revolutionary period. Not only are its personalities and tales compelling, but these comprise the story and defining issues of our country, issues that resonate today.

In the course of writing the upcoming definitive biography Dr. Joseph Warren: The Boston Tea Party, Bunker Hill, and the Birth of American Liberty, I too encountered the old pictures of Joseph Warren’s skull. They are so macabre as to invite doubt of their validity. Derek Beck’s, J.L. Bell’s and my research, all approached from different directions, reveal that these relic pictures are exactly what they purport to be. So what kind of pictures were the originals, who took them, exactly when, and why? 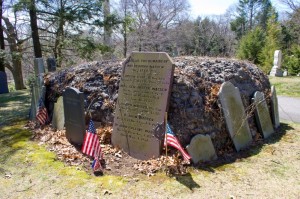 Standard histories state that Joseph Warren was buried four times: once into a hasty battlefield grave by the British, again in April 1776 in the Granary Burial Ground in the Minot family crypt, a third time in 1825 in the Warren family crypt at St. Paul’s Church in downtown Boston, and a fourth time in 1855 at Forest Hills Cemetery. Photography, introduced to the world in 1839, could only have been associated with the last of the re-interments.

Further, a photograph taken around 1855 would most likely have been a daguerreotype, taken in a photographic studio or under very bright natural lighting conditions. The firms of Albert Southworth and Josiah Hawes, and that of John Adams Whipple and James Wallace Black, were the two dominant photographic studios in Boston in the 1850’s. Southworth and Hawes took the famous Ether Dome photographs of the first use of anesthesia during surgery in 1847. Joseph Warren’s influential and quirky medical professor nephew was associated with those ground-breaking medical photographs. John Collins Warren I (1778−1856) was the same person, according to his journals archived at the Massachusetts Historical Society, who had his uncle’s remains dis-interred on August 3, 1855. John Collins Warren’s son, Jonathan Mason Warren (Joseph Warren’s grandnephew), probably had the photos taken sometime prior to the final reburial of their ancestor’s remains at Forest Hills Cemetery on August 8, 1856.1

Why would Warren’s physician descendants go out of their way to take pictures of the head of Joseph Warren? They did not write of their motivations, but we can make an educated guess. The Victorian era Warrens were proud of their Revolutionary War heritage. Additionally, phrenology, a quasi-science asserting that skull contours explained personality traits, was all the rage in both medical and pop culture circles. Given the medical proclivities of the family, it is understandable that the Harvard Medical School professors, father and son, would want to capture images of their illustrious ancestor’s skull on film. John Collins Warren I was an odd duck, who liked all kinds of specimens and body parts around his home, ostensibly as teaching specimens. Among them was a full skeleton of an Ice Age mastodon, the best specimen discovered anywhere up until that time (it is now on display as a prized exhibit at the American Museum of Natural History in New York City.) Regardless of the motivations for their creation, the pictures of Warren’s skull were some of the earliest medically-oriented and human anatomic photographs made anywhere in the world.

The pictures we see today are copies from photos once exhibited as a poster at the Old South Meeting House in Boston, themselves copies of the original photographs. So what were those original photographs like? Can inferring their properties somehow help us understand Joseph Warren’s story?

Daguerreotypes were direct positive photographs on metal. Silver-halide-covered light-sensitive silver plates or silver-plated copper plates were loaded, one at a time, into a camera. The photographer then exposed them. Images were developed in a dark room by metallic mercury vapor. The remaining light sensitive material was washed off with sodium hyposulphate solution. Shutter speeds were typically several seconds long. Bright light was required. Only direct sunshine would do in the 1850’s. The resulting images are metallic silver on metal. They must be viewed at a favorable angle, otherwise they appear as mirrors.

Daguerreotypes had the advantage of producing much sharper images than the rival (and little used) Talbotype paper process, and were less bother and expense than oil painters’ portraits. A major problem daguerreotypes presented was that they could not be reproduced unless engraved into printing plates.

Photographs employing the wet collodion method, using glass plate negatives, while just a tad less cumbersome than  daguerreotypes, could reproduce many prints from one negative, and shortened exposure times down to under a second. Wet collodion photography was introduced by 1860 and quickly displaced daguerreotypy. Readers may be familiar with Matthew Brady and his photographs of grisly Civil War battlefields. Brady used wet plate collodion photography.

When Old South Meeting House museum staff copied the daguerreotypes of Warren’s skull in the late nineteenth century, they would have taken glass-plate negative photographs from the then-20-years-old daguerreotypes, returning the originals to the Warren family, and making a poster from their copies.2 This would have been a photograph of a photograph, a necessary compromise resulting in a second generation image losing some detail from the originals.

Unfortunately, even this second generation of the photographs, once at Old South, are now lost. Fortunately, Dr. Lester L. Luntz, a dentist and forensic scientist, made a third generation photograph from those once at Old South, which he published in his Handbook for Dental Identification (Philadelphia: J.B. Lippincott Co., 1973). Dr. Luntz then kindly left quality prints (though not the negatives, presumed lost) at the Center for the History of Medicine, part of the Countway Library of Medicine under the auspices of the Harvard Medical School. These remain the best copy known to still exist.

All this sheds light on the story of the skull pictures and the methods used to produce them. But can we learn anything important from these photographs, aside from the obvious evidence of a fatal gunshot to the head? Derek Beck thinks that the bullet wound was made by a projectile smaller than that fired by a British infantry musket. Is that right? If it is true, what does it mean? Warren was killed by the British in battle, right?

8 Responses to Who Killed Dr. Joseph Warren? Understanding the Old Photos (Part 2 of 4)