Who Killed Dr. Joseph Warren? The Forensic Analysis (Part 3 of 4)

This post is part 3 (read part 2) of a 4‑part series delving into the particulars of the death of Dr. Joseph Warren, which includes posts by guest contributor Dr. Sam Forman, author of the forthcoming biography Dr. Joseph Warren: The Boston Tea Party, Bunker Hill, and the Birth of American Liberty (pictured to the right), due out December 1. –Derek

I am happy to be continue as a guest blogger, addressing the facts and legends of Joseph Warren’s heroics at the Battle of Bunker Hill. In the course of writing the upcoming definitive biography Dr. Joseph Warren: The Boston Tea Party, Bunker Hill, and the Birth of American Liberty, I based my brief account of Warren’s battlefield demise in part on an extensive forensic analysis of the old pictures of Joseph Warren’s skull. These are some of the oldest known medical or anatomic photographs, so employing them in all-new forensics constitutes an unusual application of forensics.

Derek Beck remarked that Joseph Warren’s fatal entry wound, above the left upper false teeth in the maxillary bone of the skull, seemed smaller than one might expect of a British infantry musket ball. Those balls were cast of lead, about ¾ of an inch in diameter, or 0.75 caliber. “Caliber” is firearms-speak for the diameter of gun barrels and their projectiles, expressed in hundredths of an inch. By comparison, a fearsome modern gun considered to be a large caliber is a 0.44 caliber magnum revolver (often the decimal is dropped when spoken, thus a “44 magnum”). The old British infantry muskets fired a much larger projectile.

But we have a big problem. How could one say for certain what the size of the entry wound was, or anything in the old picture for that matter, without knowing the scale of the picture? The photographer did not put a ruler into the frame, a circumstance leaving us without reliable numbers for the sizing of anything.

Or does it? What if we could obtain average measures of a large number of similar Caucasian, adult male skulls of Northern European origin, and approximate a scale for the old picture and Warren’s skull? If we could do this, our estimated scale would be data-based. We could have some confidence in the sizes of things, and any inferences we might draw from them that may be of importance to Joseph Warren’s story. Does anyone have a few dozen white male heads lying around?

Indeed, someone has. Several decades ago a Harvard anthropology professor — the late W. W. Howells — took hundreds of thousands of measures of statistically large numbers of skulls of men and women of various races and ethnicities, to the delight of physical anthologists, forensic pathologists, plastic surgeons, and others interested in the fine points of skulls.2 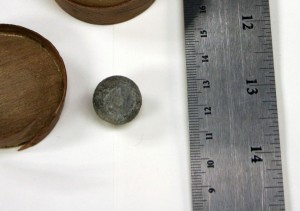 A standard musketball of the colonial era, 0.75 caliber, like those bullets fired by the Brown Bess as carried by the common British soldier. The flat spot on the ball is likely where the ball’s sprue was cut off after casting, rather than indicative of, say, an impact into a skull.

Professor Howells noted that adult skull sizes are much less likely to be impacted by nutrition and other environmental factors in the way long bones are. Heredity rules relative to the size of your head.

Digging deeply into Professor Howell’s tabulations, I found detailed data on over 150 Northern European skulls of  white men who died in recent centuries. Included were 55 Norwegian skulls from the Anatomical Institute of the University of Oslo, 54 Hungarian skulls from the Natural History Museum of Budapest, and 56 Austrian skulls from Carinthia. Of Howell’s various measurements, Orbital Breadth (OBB) varied the least among these three Caucasian groups. What variation there was among the skulls was quantified statistically with standard deviations. OBB was 40.4 millimeters (range 38.95−43.24, +/- 2 standard deviations) for the middling population, the Norwegians.

Returning to Warren’s skull photos, I concentrated on the 7/8ths frontal view, having it manipulated digitally to a full frontal view. This eliminated the distortion intoducerd by the rotated angle. Putting calipers to the picture, I measured the relative size of Joseph Warren’s OBB at 139 pixels; and the fatal entry wound at 47 pixels.

Using Howell’s actually-measured average OBB, I could set up a ratio calculating the size of the entry wound. Recalling for some of us 6th grade arithmetic:

I want to assure the reader that this “Crime Scene Investigation” approach was deep background to my definitive new biography of Joseph Warren. I did it to rest the account of Dr. Warren’s heroic demise on a rock-solid foundation. It was all the more important because what really happened was very unlike most eyewitness accounts, contemporary beliefs, legends, and standard history books.

The Conclusion Next Monday: So just who killed Dr. Joseph Warren?

3 Responses to Who Killed Dr. Joseph Warren? The Forensic Analysis (Part 3 of 4)