An Apple a Day Keeps Joseph Warren II Away

In my sequel to last year’s post about this time: An Apple a Day Keeps Dr. Joseph Warren Away, I have again this year received several apples of the Warren Russet (or Roxbury Russet) variety, an apple hybrid first cultivated in Roxbury Massachusetts by Joesph Warren II, father of the Boston revolutionary Dr. Joseph Warren (III). These apples, along with a bottle of hard cider made from the same variety, were kind gifts from my fellow Warren historian Dr. Sam Forman (get Forman’s excellent biography on Dr. Warren).

As Mr. Joseph Warren [II] was gathering apples from a tree, standing upon a ladder at a considerable distance from the ground, he fell from thence, broke his neck, and expired in a few moments.

So it was that the cultivator and namesake of the Warren Russet died while picking those very apples, perhaps the tree having some ice by late October, thus causing the fall. Though we see this was reported above on October 30, Sam Forman found that the actual death date was October 22. And so, I, Sam Forman, and comic book artist Lora Innes of the revolutionary war series The Dreamer, all met online (in a Google+ hangout) to commemorate the death date of Joseph Warren II with a toast of the Warren Russet Hard Cider.

I did my preparations ahead of time: making a pie from all but one of the apples Sam sent me. I actually got the idea from Lora, who had made a pie last year. And wow, the pie was awesome… but how can you really wrong with butter, brown sugar, and white sugar? The “W” slit is for Warren of course. (The recipe I used.) 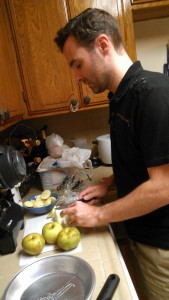 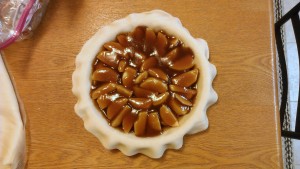 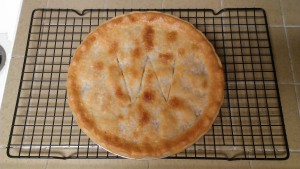 So Lora (also a recipient of apples and cider), Sam, and I all toasted various Warren related things, virtually via Google+. The power of the internet still amazes me. Lora and I have met before, and she has met Sam, and I have met Sam separately, but this was the first time we had all interacted live, outside of the Twitterverse.

Sam and Lora had suggested the toast for Oct 22 to commemorate JWII’s death. But I, with apple pie in one hand (Sam and Lora were licking their lips), hard cider in another, proposed an explicit toast to the death date of Joseph Warren II.

Was it so morbid to toast to the “death date” of Joseph Warren II? Perhaps. But he did die just before Halloween, so I maintain that some dark spirits influenced that particular toast. (We made several toasts that evening… the hard cider wasn’t going to drink itself!)

But moreover, I made the case, using Sam Forman’s own book as support, that our revolutionary Bostonian Dr. Joseph Warren III would not have been the pivotal leader he ultimately became had his father lived on.

Let me explain. Sam Forman theorizes Warren had a brief bond that was almost reminiscent of a father-son relationship with Boston’s last non-military Royal Governor Thomas Hutchinson, years before the rebellion broke out there. Regardless of that theory, one thing is certain: Dr. Joseph Warren III’s later relationship with Samuel Adams was most definitely father-son like, and heavily influenced the doctor’s political leanings and understanding. But would the doctor’s relationship to Sam Adams have been as strong had the doctor’s own father lived on? We can never know.

So, is it a stretch to thank the doctor’s father, Joseph Warren II, for giving his life so that his son might then rise to prominence? Probably. But the toast to JWII’s death date was equally a toast to commemorate the father of one of America’s greatest founding fathers. And that, I think, deserves a toast!