Anniversary of the Battle of Bunker Hill is Around the Corner

June 17 will mark the 237th anniversary of the Battle of Bunker Hill (see my blog post that gives an overview of the battle). Just in time for this important date in revolutionary history, Dr. Paul Lockhart’s book The Whites of Their Eyes: Bunker Hill, the First American Army, and the Emergence of George Washington hits bookshelves (on June 12) as a paperback (pre-order it here). (Or buy the hard cover.)

I had the pleasure of meeting Dr. Lockhart a few months ago for lunch, as he is a history professor at Wright State University in the Dayton Ohio area, and I was there for Air Force Reserve duty (that “two weeks a year” part of the “weekend a month and two weeks a year” commitment you may remember from the old commercials). (See Paul’s own blog, Past in the Present.) It was only recently, however, that I found time to actually read Paul’s book (the hard cover). Simply put, Paul’s writing is excellent, rare for a pure historian, and his coverage of the Battle of Bunker Hill is perhaps the best version of the story on the market. Moreover, it is an easy and quick read.

In fact, Paul’s book is the reason why I’ve been a little slow at posting on this blog lately. You see, Whites of Their Eyes so smartly questions all of the traditions and legends and mystique surrounding The Battle of Bunker Hill that I felt obliged to comb through my own 1775 manuscript in search of areas where I too, like so many before me, might have fallen into the trap of quoting traditions and legends that are not fully supported by original source material. 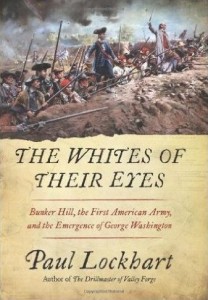 For example, many of the books on the battle from the 1800’s, written when America was young and feeling especially proud (they had just beaten the British a second time in the War of 1812), have an overly American bias, riddled in some cases with absurdities. While I mostly depended on the original source materials (i.e. the letters and diaries of the participants of the battle), much information is missing. To paint a full picture of the battle, we modern authors must use secondary material, such as those books of the 1800’s, many of which depended on interviews of the participants, though such interviews were sometimes fifty years after the battle, and the interviewees had by then much inflated their stories even in their own minds. Moreover, interviews fifty years after the fact are subject to forgotten details, as the interviewee was by then much advanced in age. Yet we modern authors must sift through this to paint the full picture, or otherwise be forced to tell a disconnected story of the battle with many gaps in the action.

I of course did what all modern authors do: I went through the later information with a skeptical eye, eliminating that which was clearly false or exaggerated. But Paul Lockhart, in his book, not only does this, but also cuts through some of those traditions we have long associated with the battle. For example, we have since grade school been trained to think the British were tactically stupid, such as when they “foolishly” attempted to assault the Americans with bayonets alone. But as Paul’s book describes, bayonet charges were used because they worked! Remember, the Americans had muskets (no rifles yet), and on average these could only be fired twice a minute, and the shots were woefully inaccurate beyond about 100 yards (though a lucky shot could still be deadly to 200 yards or so).

As another example, many books note that the British marched into the battle laden with 125 pounds of baggage per man, as if on campaign, while the nimble Americans sniped at them from behind their protective works. In fact, the British General Orders for the day state clearly that camp equipage was not to be brought over until after the battle (the next day in fact). The British did not march into battle laden with 125 pounds. As Paul astutely figures, they marched with perhaps 30 pounds: musket, bayonet, and all.

There are many more such examples in Paul’s excellent book Whites of Their Eyes, and as mentioned above, his book impressed upon me the need to re-evaluate my own take on some of these traditions. I’m midway through combing my Bunker Hill chapters as a result, though the tweaks I’ve made to my manuscript are minor. While I occasionally disagree with Paul’s take on some very minor points, all in all, I found my interpretation of the battle remarkably similar to that of his. Also, as Paul’s book is devoted to the battle itself, as well as the lead up and aftermath thereof, he of course has the freedom to get into certain details that my 1775 does not have room for.

I highly recommend Paul Lockhart’s Whites of Their Eyes. And if you buy it through the links below, you can help support my own project as I seek to find a publisher:

Keep an eye out for the July / August issue of Patriots of the American Revolution magazine, which will feature an article by myself regarding Col. Henry Knox’s Expedition of his Noble Train of Artillery from Ft. Ticonderoga to the Boston area.