In my last post, I talked about Lexington Green and its significance as the start of open conflict in the American Revolution. In researching that post, I learned something quite interesting about the flag posted there: it is among few flags flown in the United States for 24 hours a day, each and every day, by order of the President of the United States or otherwise per public law. (Of course, private individuals and other locations fly flags 24 hours a day per custom, but they are not mandated by law to do so.) 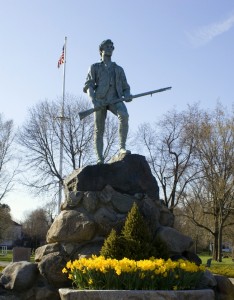 There are only few such flags throughout the United States. The one on Lexington Green was ordered to be flown 24 hours a day per Public Law 89–335, approved November 8, 1965. The other 24-hour-a-day flags are:

Interestingly, the oldest proclamation of the above was for Fort McHenry, in 1948. As you may recall, Ft. McHenry was the site of an important battle in the War of 1812 between the young American nation and Britain. It was also the battle that inspired Francis Scott Key, who was watching the battle from a ship in the harbor, to write the poem that later was set to music and became best known as “The Star-Spangled Banner”, the American national anthem. (Incidentally, the War of 1812 lasted longer than 1812, and the Battle of Ft. McHenry was waged in 1814. Perhaps this is part of the reason why the War of 1812 is also known as the Forgotten War!) 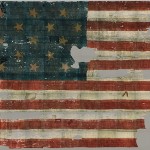 The “Star Spangled Banner” flag that flew over Ft. McHenry and inspired the American National Anthem. It is one of those flags flown 24 hours a day. (Click to see an interactive version of it)

The flag that flew during the Battle of Ft. McHenry was that true inspiration of Key’s poem, the materials for which were cut at Mary Pickersgill’s home in Baltimore, listed above as one of those few places to have a 24-hour-a-day flag. That original “The Star-Spangled Banner” is now preserved and on display in Washington DC at the Smithsonian National Museum of American History.

Who knew the Lexington Flag was in such esteemed company?

The Lexington flag, pictured above, has on midway up its pole (really what appears to be a ship’s mast) a metal banner, which reads: “Birth Place of American Liberty”. At the foot of the Lexington Flag are several stones: one a dedication of the flag, one noting that it is to be flow 24 hours a day, and one designating the Green as a Registered National Historic Landmark.

Thanks for reading. I’ve been busy with some minor edits to by manuscript 1775, which is the reason for posting later than I expected. I’ll tell you more about these in the next post.